During the Fall of 2012, I was inspired by the Ulu Festival held at the Greenwell Botanical Gardens.  I learned about the Hawaiian meanings of ulu (breadfruit) which symbolizes abundance and flourishing in mythological tradition.  In one story, the God Kū, buries his head into the earth, to emerge as an ulu tree to feed his people.  In another, Pele is given ulu as nourishment, a gesture of generosity and compassion during a time of scarcity and famine.

In recent years, people have forgotten the value of ulu as a source of food security, and inspiration, and the Ulu Festival has been part of a community effort to revive a fuller understanding of the varieties of ulu and all it can provide us.  I happen to have an ulu tree in my garden, and I was spurred to re-examine its leaves, fruit, and meaning through the paintings shown below.   Wishing you much ulu . . . !

Ulu for Pele
A story about generosity and compassion: A despairing Pele (in a lava tube in the depths of the ocean) is
nurtured by two youths who bring her ulu (breadfruit) during a time of scarcity and hunger.
In gratitude, Pele later saves their village from destruction by lava, and allows the village families to flourish.
60" x 144" Original acrylic and ink on three-part canvas
$18,000 unframed 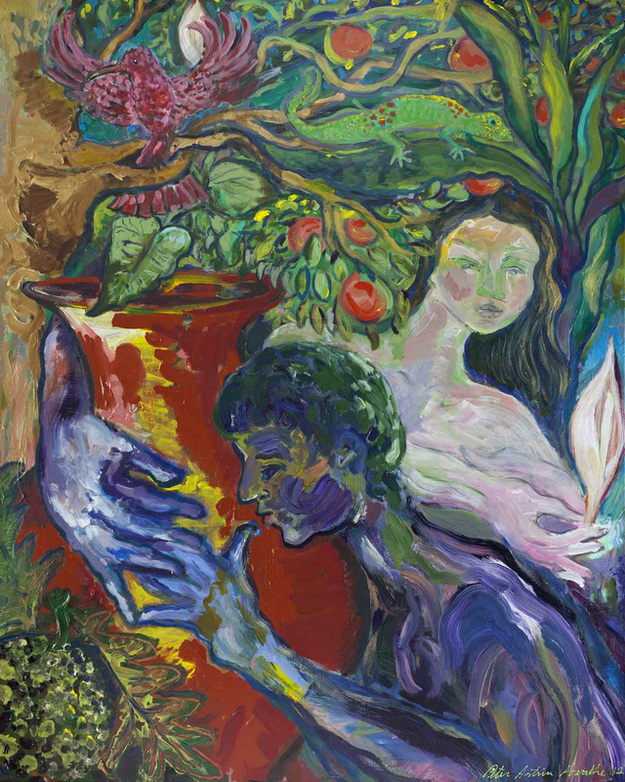 Water for Ulu
Potter guided by the hands of a greater force and love of the forest.
48" x 60" Original acrylic and ink on canvas
$9,000 unframed 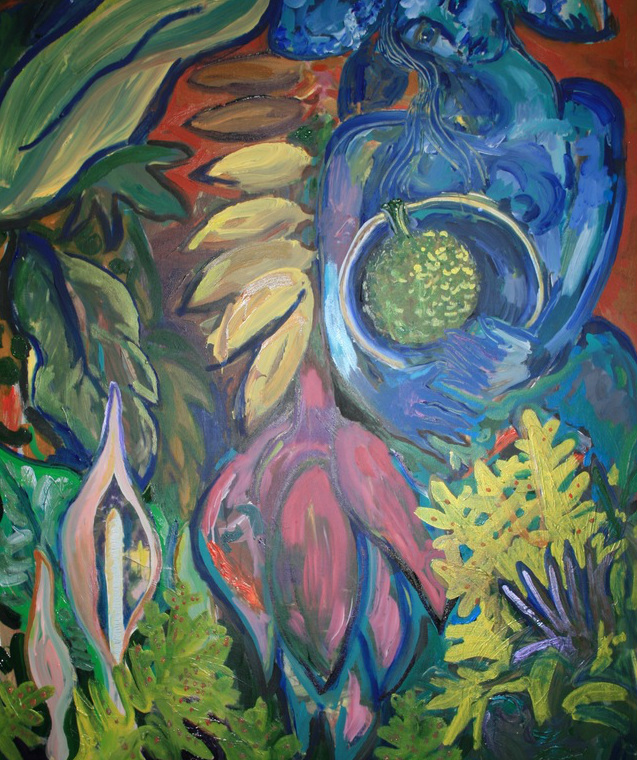 Ho'oulu
Inspired by the 'Ulu festival 2012 - celebrating breadfruit,
with thanks to the god Kū, who planted himself as a seed to feed his people.
48" x 60" Original acrylic and ink on canvas
$12,000 unframed.

On display from February - March 2013 at Duty Free Shoppers-Waikiki and
available through the Fine Art Associates in Honolulu, Hawai'i.

Kalo Life Flow
Inspired by the story of the twins and birth of kalo
(sacred food source for Hawaiians and my favorite fuel: poi!)
Three canvases of 48" x 60" each (168" wide and 60" high in the middle)
Original acrylic ink and graphite on canvas
$18,000 unframed